TL;DR: In this blog, I’ll explain my approach to solve the BFS exploitation challenge [1]. The challenge was published by BFS to win a ticket for the BFS-IOACTIVE party during the Ekoparty conference. The exploit was developed on Windows 10 x64 1909.

A while ago I’ve seen this challenge published by BFS. The aim of this challenge was to bypass Address Space Layout Randomization (ASLR) remotely, get code execution, and execute a calc.exe or notepad.exe on the running system. Execution of one of these programs proves that the system was fully under our control. Furthermore, it was necessary to restore the execution flow after successful exploitation in order to ensure that all functions work properly. 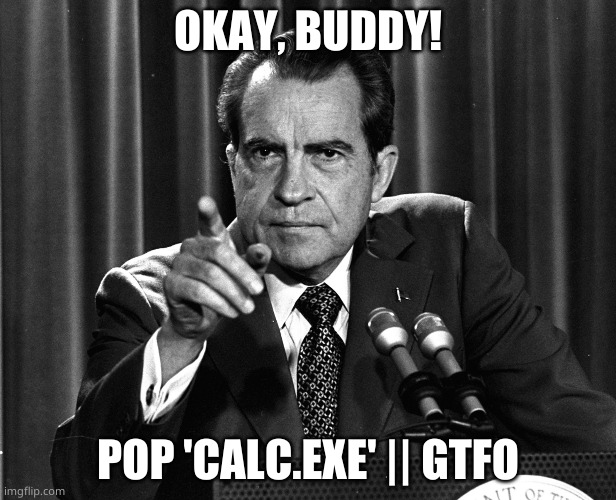 In general, I use IDA for most of the reversing tasks but in this case, I wanted to try out the cloud version of Binary Ninja [2]. Usually, I follow a static and dynamic approach which means I run the application in WinDBG and also in IDA. This combined the strengths of both techniques. However, first I’ve taken a look around the small binary to get a basic understanding of the binary. My major focus was on the given output strings after the eko2019.exe was executed. The idea behind this approach was to find the first foothold. Also, a good point to start was the main function eko2019+0x1410:

After I looked a bit deeper, the following actions were identified and will be performed by the eko2019+0x1410 function (main):

If the message is aligned by 8 bytes the received buffer content is displayed on stdout. The return value of the printf method is stored in the .data section. After doing both, static and dynamic analysis, we know that, before the function eko2019+0x1170 will execute, RCX contains the previously created table of 256 QWORD initialized with the value 0x488B01C3C3C3C3.

The listing below shows the function before eko2019+0x1170 was executed and WriteProcessMemory() has overwritten the first 8-bytes:

After the execution of the 8-bytes, the value containing in RAX is sent back in the socket. Luckily, we are able to control the RCX and RAX registers by sending more than 0x201 bytes rather than 0x200. We are able to control only one byte of the RAX register, in the example above 0x3e, which provides a limitation of instructions. Later, we will see that this one byte is enough to achieve code execution.

As we know from the reversing session, we are able to control the RAX and RCX register. This means we can change both, the code execution via the RAX register and its argument with the RCX register. If we only change the RCX register it provides us an arbitrary read. This is a very strong primitive.

ASLR can be easily bypassed by using the arbitrary read primitive. The problem is to find a suitable memory address that we can read. In Windows 64-bit we are able to get the address of Process Environment Block (PEB) with the special GS register. By providing the accurate offset, GS can point to the PEB with the offset 0x60.

The value of RAX is sent back in the socket and leaked the address of PEB. In the next step, this address can be used to leak the Image Base Address of eko2019.exe. This can be achieved by adding 0x10 bytes to the leaked PEB address:

Putting all together allows us to defeat ASLR:

To verify that the base address of eko2019 is correct we can look into WinDBG:

With this approach, we can also read the StackBased address at offset 0x082, which gives us a pointer to the stack. With the stack base address, we are able to read the whole binary memory space as well as the current thread stack.

Now, that we are able to leak the image base address of eko2019 and bypass ASLR we would like to gain code execution. In place of changing the RAX register to a prefix to read arbitrary data, we can change it to a 1-byte3 instruction to change the execution flow:

The push rcx instruction allows us to place the controllable value of RCX onto the stack. After that, we just need to find a gadget that changes the RSP pointer to our stack buffer. The stack buffer contains data that we control. In general, more gadgets to build an ROP chain.

The controllable stack is around 0x60 bytes above, which means we need a gadget that adjusts the RSP register that it points in our buffer after the function at eko2019+0x1000 was executed. Such gadgets can be easily found with rp++ [5].

This gadget, so-called “stack-pivot”, is our first gadget and is placed in RCX. Through the push rcx instruction, the stack-pivot gadget will push onto the stack. As a result, this gadget will be executed after eko2019+0x1000 was executed, as we can see below in the WinDBG snipped.

So far so good, we are able to point RSP to our controllable stack, by adding 0x88 bytes to the current RSP value. But, how we can get code execution? What kind of ROP magic can we perform to achieve our goal?

From the reversing session, we know that WinExec will never execute because of the number of arguments passed to the binary. We can change this situation, all we need to do is to set RCX (argc) and RDX (argv) and returning to the main function.

This can obtain through the fact that we can prepare the stack before we hijack the main function flow at eko2019+0x1419. Furthermore, we have to prepare argv[0] (lpCmdLine) with our command that should execute through the WinExec function. The executed command can be stored in the controllable stack. In the course of this, argv[0] has to point to a string we control.

With the aid of the read primitive, we can obtain the StackBased address and walk through the stack and looking for a magic value (EGG). An example implementation in Python could look like:

With the obtained address were able to get the addresses for both instructions at 0x14000143b and 0x140001443. Before WinExec will execute our stack could look like:

If all arguments are set correctly, WinExec will execute our command.

One of the rules for this challenge was to restore the execution flow after successful exploitation in order to ensure that all functions work properly. My approach to restoring the execution flow was to fill the ROP chain with ret gadgets until we reach eko2019+0x155a.

After my OSEE in September last year, this was a great exercise and I really enjoyed this challenge. From my point of view, the hardest part was to build an ROP chain and restore the execution flow after executing arbitrary code.

Luckily, the developer of this nice challenge imported the WinExec Windows API. With the appropriate address, it was pretty simple to redirect the control flow directly to the Windows API call at eko2019+0x1446.